My name is Lovell Pierce Jr., EagleElk aka FireWalker. Some of my friends know me as Amur.
I was given my name by a Tuscarora Elder and Seer, Ted SilverHand, who said because of my spiritual vision , lofty message, leadership and ability to use my body as a complete weapon that I was given this name.

Tsalagi White Wolf, a Cherokee Elder Woman and Seer also told me that I belonged to the Bear Clan who are healers and teachers of nature's medicine. She also said that's  why I'm drawn to teaching survival, combat and natural medicine.

The Bear appears gentle while being one of America's most fierce Woodland dwellers.
Rahkwees keh, the Pipe Carrier of the Tuscarora people and Elder who was taught the sacred ways and ceremony by Mad Bear Anderson at Six Nations was given the instructions to teach ceremony and sacred ways to all whose willing to learn, he advised me to keep Creator front and center and to open up training classes by giving thanks and asking for protection of all students so training would be safe and successful.

Deceased Chief of Elders, Two Bears told me to continue on this path of setting the record straight and of course I said, "gladly". Two Bears is a highly respected and knowledgeable person with a genuine giving heart who I truly miss.

Waccamaw Siouan Tribal Member and Elder Mrs. Norma, much thanks to her for talking freely to me about family values and the importance of community.
When it comes to raising kids traditionally and teaching them how to be respectful and able to do for self, she was absolutely on point.  Thank you Mrs. Norma.

She is truly an oldschool teacher, she’s straight and direct with very little chaser which makes her a jewel because it’s coming straight from the heart, all love.

My friend, cousin and Genealogists, whose name will remain unmentioned by request who specializes in research and Indigenous law and works in the enrollment department for a local tribe did a great job with my genealogy, uncovering files that's not easily accessible too to help me connect these limitless dots of the southeast.

My friend Larry EagleHeart and his wife Mary have done genealogy for over 28 years adding me to the list of accomplishments.

My cousin and EagleHeart both encouraged me to continue with my mission of setting the RECORDS straight and are glad to have played a role in my mission of bringing our families together.

I thank my relatives Dr. Franklin Freeman PhD,  Joshua Freeman,  Luke Alexander and Keith Jacob's for their tanacity for tracking and tracing our family in the Cape Fear region and connecting our Waccamaw relatives to the line of the Chiefs in the Waccamaw Siouan Tribe and Derek Keith  who specializes in DNA and runs several DNA projects based out of Houston Texas and who is equally responsible for connecting our families among the Haliwa-Saponi, Occoneechee, Lumbee, Waccamaw, Cape Fear, Tuscarora, etc....I'm equally thankful to our other cousins and expert researchers as well.

My Elder Cousin who has passed away, Cousin Charles Ward, Waccamaw, and his wife, Baby Sis Ella Jacobs, medicine women who has also transitioned, both told me to keep doing what Im doing for the family regardless of all of those who argue, disbelieve, debate and pull you down, they said to keep doing what I’m doing.

Baby sis said they talked about her and I personally witnessed  her being called root doctor in a derogatory way all because she trusted in herbs oved pills. I’ll glady keep this path and make them proud.

Lastly my immediate family know the love I have for them is deeper then words can express.

Everything I do from talk radio, health, fitness and martial arts is 1) because I love doing it, 2) because it was needed and from all of the signs, readings and confirmations its the path I suppose to be on and lastly because I’m all about family coming together. Can’t get any simpler than that. Hate it or love.

My heritage and culture is of the Cape Fear Indians mentioned in VA, NC & SC early colonial records from both Maternal and Paternal sides of my family. We are Tuscarora (Woccon) Indians contemporarily known as Cape Fear Indians..

We are a Haudenosaunee people, Iroquois culture who have common relatives among most of the North Carolina tribes.

The Carolinas have a deep historical presence of American Indian,  Colonial and Slave history.

The first slave being Indians and later replaced by African slaves. We have Middle Easterners, Blacks and Whites who have married into our Indigenous families as early as the 1600s. This occurred up the entire Eastern seaboard with many of our people being exported and imported from the West Indies Islands.

Sometimes it was political and other times it was love, either way, today we embrace it all.
Many of us grew up disconnected from our culture, unaware of who we are only knowing bits and pieces our parents, grandparents and other older relatives would let slip out sometimes.

They didn't like talking about what they called, "family secrets" so we grew up not knowing.
However like my cousin, Rahkweeskeh, the Pipe Carrier for all Tuscarora People told me it's a must to reclaim our Indigenous Culture and honor our ancestors and Creator.
The Carolinas, specifically my area called Lake Waccamaw was a Melting pot of Indian wars, European wars, Colonial settlement  and Indian displacement.

The many Indian wars of the Carolinas is proof of this and validates the combative history of Martial arts among Native Americans.

We grew up wrestling as kids and now being able to put historical context with it gave the arts an all new meaning and importance to me.

Through my years of cross training and learning multiple disciplines, one of my teachers, Soke Childress "The Soke", encouraged me to step out on my own and create or re-create my own way. In his words, "Kill the Buddha".

This led me to talking with many elders, other researchers and people wanting me to succeed by gathering and reconstructing many of the combative weapons, movements and ideologies of my native ancestors in the southeast.

With the help of My Lakota brother James who is a 5th degree Black Belt, Navy Seal, Indigenous Living Editor, Survival Expert and Executive Security Expert, I've been able to recreate the art of ATASSA to represent the Woodland Native Americans and specifically the Southeastern Native Americans form of Combat.

This was not handed down to me from an elder or war chief, it was not taught to me by a warrior society or found in some mystical scrolls. Although that sounds fascinating it is highly unrealistic and false.

Atassa is the result of research, hard work, test, trials, success and failures to see what works and what doesn't work using Indigenous American concepts.

Compounded with my years of experience, we feel this is definitely an art to be proud of that represents the Indigenous First Nations People.

All arts were created the same way. By someone dedicated to personal, spiritual, mental and physical health, fitness and transcendence, MOM (mind over matter).

Also dedicated to precise ways of striking down an enemy without exerting too much energy, the protection of family, mothers, fathers, children, elders, our ways of life and our tribes. Many things went into the creation of ATASSA.

The art will continue to outgrow me as it should. I’m just reminding you that our warrior spirit is still here.

I Am Savage is not to suggest a negative connotation but serves as a window through the eyes of an oppressive regime based on the regimes claim of superiority which is also based on it's religious doctrine hence, The Doctrine of Discovery and Manifest Destiny.

The SAVAGE written about here represents everything opposite of the oppressive explorers who landed on the shores of Turtle Island.

We welcomed this in the sense that,  if being godly means enslavement of women and children, committing genocide by giving innocents diseased blankets or completely destroying a human culture based on the self proclaimed superiority of a man then we welcomed being the opposite of those committing these acts.

SAVAGE became synonymous with warriors, fighters, rebels and survivors by any means necessary.
Native American Martial Arts (NAMA) existed on the American continent before European arrival. NAMA was a major part of our culture.

This book will show how combative arts was and is an intergral part of Native American Culture. It’s the origin of American Guerrilla Warfare.

This book covers speed and the illusion of speed, motion, Hicks Law, Foot work, and the philosophy of Atassa. You'll learn much more in I Am Savage.

Order on Amazon-Click here: I AM SAVAGE 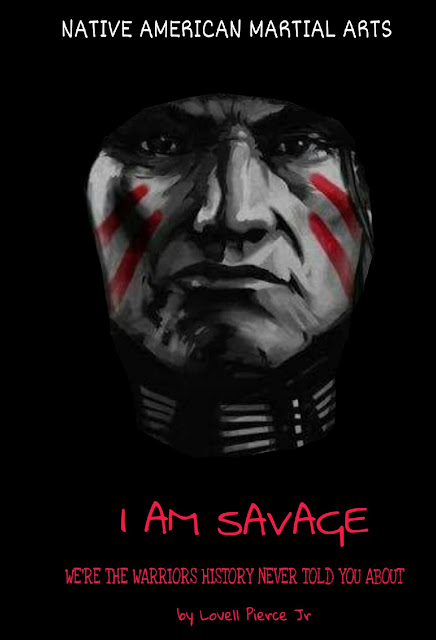 Posted by Lovell Pierce Jr at 8:03 AM